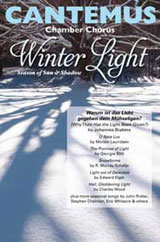 As I write these program notes several weeks before this concert I am, somewhat distressingly, aware of something of the shorter days, the colder weather, and a sense of being plunged into darkness and winter. Centuries ago, before artificial lighting, how eerie and strange it must have felt when these things were happening. The isolation of snow, winter, and darkness must surely have compounded a difficult existence.

People react to light and shadow, sun and moon, brightness and darkness. Even though we might wish to hibernate until it has all passed, life goes on in the midst of the seasons and despite our reactions to them. This season draws comparisons to light conquering darkness, and so perhaps it makes sense that light became a symbol of hope, redemption and victory in many faiths.

The centerpiece of the program is the Brahms motet “Warum ist das Licht gegeben dem Mühseligen.” Composed (and sung) in German, it is based on texts from Job, Lamentations, James, with a final musical “chorale” on a Martin Luther text. This great work by this great composer presents a musical challenge like no other. The opening chords as “Warum? Warum?” or “Why? Why?” set the mood for the text that follows—“why has light been given to afflicted spirits who wait for death yet it does not come?” After those chords, Brahms sets that text in a strict canon that is deeply moving. Subsequent movements seek to answer this question, with Brahms making use of imitative techniques, chorale settings, richly structured Romantic harmonies and dynamic variations. In this work, Brahms, the technician, creates a setting of deep emotion within a structurally formal framework.

The English composer Edward Elgar is perhaps best known for his large choral / orchestral canvas “The Dream of Gerontius.” Our program has three works from an earlier and lesser known extended work entitled “The Light of Life” (opus 29). These texts were written by Reverend Capel-Cure, and are clear and straightforward in their meanings. The music is highly engaging and beautiful, containing a variety of legato melodies, powerful homophonic statements, and dynamic contrasts. We also perform a separate work with words by Elgar’s spouse, alluding to the purity of snow and the soul. Rounding out the earlier musical styles being sung on this program is Charles Wood’s “Hail, Gladdening Light” for double chorus. This music is richly harmonic and beautifully resonant.

The 20th century perspective is represented by several American and Canadian composers. In an introduction to his “Snowforms,” the Canadian composer R. Murray Schafer writes that “it has been the habit of observing the soft foldings of snow from my farmhouse window in Ontario that has inspired ‘Snowforms.’” Composed for treble voices, Schafer eschews traditional staffs, notes, and clefs in this score, directing the singers with pitch letters, lines of various shapes, and other notations that are more graphic than musical. The resulting work truly manifests snow-forms and textures of winter.

Eric Whitacre, an important composer of contemporary choral music, sets a poem of Latin text in “Lux Aurumque” (“golden light”). This text was originally in English and, at Whitacre’s request, was translated into Latin by the American poet Charles Anthony Silvestri. Whitacre uses the beautiful Latin words, so richly vowel-oriented, to create a choral soundscape that aims to “shimmer and glow.”

Another Latin work being sung on this program is “O Nata Lux.” This work is a movement from the five movement work Lux Aeterna (1997) by the American composer Morten Lauridsen. All of the texts in the larger work contain references to “light.” In the preface to this larger work, Lauridsen writes that “O Nata Lux” is “the central a cappella motet” of his five movement work. It is a beautifully introspective meditation on the one “born light of light.”

You will also hear works by another Canadian composer, Stephen Chatman, as we sing his “Blow, Blow Thou Winter Wind.” You may recall that Cantemus performed his “There is Sweet Music Here,” for chorus and oboe, last spring. Today’s work is based on the classic and well-known text by William Shakespeare, wherein he describes winter as “not so unkind as man’s ingratitude” and that “most friendship is feigning, most loving mere folly” — yet another metaphorical link of winter beyond its stark darkness.

Also present on this program, with a movement for men’s voices from the larger Frostiana, is “Stopping By Woods on a Snowy Evening.” This evocative Robert Frost poem is skillfully set by one of America’s most celebrated choral composers, Randall Thompson, as he uses a very slow sustained tempo to paint a picture of snow, darkness, and duty. And Stephen Main’s work celebrates “the God of love in Mary’s arms” on “The Darkest Midnight in December.

In many ways, this program reveals the varied moods and energies of winter, light, snow and the human response to it all, with repertoire that captures various interpretations of the season. The music you will hear embodies composer’s interpretations from both a 19th century Romantic perspective and a contrasting mid- to later 20th century contemporary view. It is my hope that these themes, heard from two musical viewpoints, and presented as an eclectic mix of contrasts, will speak to the broader human experience of this season of light and shadow.