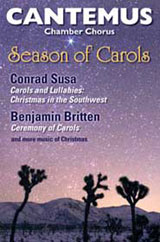 Do you have books on your bookshelf that you haven’t read? You know they are good books, you want to read them, you may have even started them but then wandered away for any number of reasons. There are about ten books that I have been wanting to read lately, and probably thirty more on my shelf. Someday, I am going to read them.

Musicians have a corollary to this: In the back of our minds, there are always those compositions that we would someday like to perform, but, for whatever reasons, the time hasn’t been right. I have choral works in a bin, stacked on a shelf, and in file cabinets. Every once in a while I look at or listen to them, reminding myself that someday I will conduct those works.

Well, the time is right for one of them – Conrad Susa’s Carols and Lullabies: Christmas in the Southwest. I can’t tell you how many times I have looked at this work and thought, “Okay, now is the time!” and this time, it really is! In the program note to this 1992 work, Susa writes: “Four or five years ago, Philip Brunelle suggested I write him a companion to Britten’s A Ceremony of Carols. To a composer, this tempting offer was another way of asking “How’s about writing us a hit?”

Susa goes on to say that after a few years of doubt, a friend showed him some traditional Spanish carols, and this was the spark that Susa needed. He began to form a narrative, seeing lots of connections between the carols that could be explored to produce an extended multi-movement work. “Finally, the overriding image of a Southwestern piñata party for the new baby led me to add guitar and marimba to Britten’s harp and to compose connective music and totally re-conceive the carols.”

The result is a masterful piece that you will hear in the second half of our program. Susa explores the Christ child’s birth through the many moods, rhythms, and colors of Bethlehem carols that use varied texts – Biscayan, Catalonian, Puerto Rican, Spanish, Andalucian, Castilian, and Mexican. The evocative timbres of the harp, the marimba and vibraphone, and the guitar are woven into an instrumental fabric that is at times beautiful and serene and at other times rhythmically energetic.

Indeed, it was a wise thing to write a work that could be programmed along with Britten’s A Ceremony of Carols. This work, for women’s voices and harp, was conceived in 1942 and was at first merely “7 Christmas Carols” that he had composed while on a ship to the United Kingdom from America. On that trip he had also completed Hymn to St. Cecilia, which he probably considered his main achievement, writing that the carols helped to “alleviate the boredom” of the voyage.

While on the journey, Britten had studied two harp manuals in order to understand how to write for a commission he had been given. The commission was not for the carols, but for a harp concerto. Nevertheless, Britten seems to have been inspired by a volume of poetry (The English Galaxy of Shorter Poems), and the result is the ever popular A Ceremony of Carols. It appears on numerous choral programs each year because it is a vibrant, beautiful, and fulfilling work for both audiences and performers.

The women of Cantemus and our guest harpist will begin this concert with “Ceremony,” which is Britten’s Opus 28. I encourage you to listen closely for the overall melodic lyricism and rich harmonies, along with the varied rhythms and virtuosic harp accompaniment. This work is performed often for a reason – it is a masterpiece.

Following the Britten, the men’s voices will be featured in a performance of Franz Biebl’s “Ave Maria.” Biebl, whose lifespan is almost a mirror of the twentieth century, composed this work in 1964 and it, too, has become a “must-sing” piece of choral repertoire.

Each concert half will end with beautiful carol settings for chorus and guitar by the American composer Jeffrey Van. Mr. Van’s work as composer and performer is highly regarded, and his choral compositions have been featured on recordings conducted by Dale Warland, Philip Brunelle, and many others. As a performer, he has premiered over fifty works for guitar, written by significant composers of our time. He currently teaches guitar on the music faculty at the University of Minnesota.

We are so pleased to have three guest instrumentalists appearing with Cantemus on this program. Tomina Parvanova will play harp on both the Britten and Susa works. She has served as principal harpist with many regional ensembles including Boston Ballet, and is currently pursuing a Masters degree at Boston University. Abe Finch, who has appeared on a previous Cantemus concert, will perform on marimba and vibraphone in the Susa, and will also perform a marimba solo. It is rare that our audiences hear this radiant and subtle instrument. Abe is an active performer and educator in this region. Steve Kirby, guitarist, will perform on the Susa work and for several of the carols. Steve is an active performer of classical and jazz guitar and teaches at Berklee School of Music.

So there you have it, a ceremony of carols, some carols and lullabies, and even more carols, all in evocative and imaginative arrangements that employ three important but perhaps lesser known instruments. Together, it makes a "season of carols” and I sincerely hope that you enjoy this program. It all started with a work “unread” – those often bring the best surprise and satisfaction, and I hope that it is true for you as the concert unfolds in your ears, minds, and hearts.

[Program notes compiled, in part, from notes by Conrad Susa in his Carols and Lullabies and from notes by Philip Reed (1994) preceding the Boosey & Hawkes edition of Britten’s A Ceremony of Carols.]