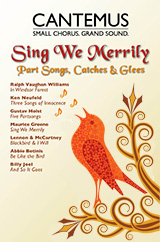 Today’s program is loosely but lovingly inspired by the English tradition of part songs, catches and glees, a centuries old tradition, long sung and enacted in music halls, concert stages and academic communities. Intended for chorus, rather than solo voices, the part song (or part-song or partsong) is harmonically conceived – indeed, at its simplest it is essentially a melody harmonized by lower voices, written to a secular text and usually sung unaccompanied. As a point of reference, the madrigal is distinguished from the partsong by its polyphonic (two or more simultaneous melodic lines perceived as independent even though they are harmonically related) part-writing and generally non-chromatic (the avoidance of semi-tones or accidentals in order to modify the ‘normal’ scale) of harmony. At its height, the part song was written by the likes of Elgar, Holst, Vaughan Williams, Mendelssohn, Goss, Parry, Stanford, Sullivan and more!

The glee, a uniquely English creation, was a type of part song spanning the late baroque, classical and early romantic periods. It was especially popular in the 18th century and was usually scored for at least three voices, generally intended to be sung unaccompanied. Texts could be convivial, fraternal, idyllic, tender, philosophical or even (occasionally) dramatic. The glee’s respectable and artistic character contrasts with the bawdiness of many catches of the late 17th century, which made glees appropriate in female company. Although most glees were originally written to be sung in gentlemen‘s singing clubs, they often included soprano parts—which were sung by boys (church choristers) in earlier years, and later by ladies who were often present as guests. Our “glee” this evening is the famous collegiate “Where, O Where are the Verdant Freshmen?”You will be surprised to learn that the tune, solidly quoted in Charles Ives’ Symphony No. 2, is adapted and sourced from the famous American shape note music book, Southern Harmony, compiled by William Walker in the early 19th century.

Catch originally meant simply a round for three or more voices (unaccompanied), written out at length as one continuous melody. But the catch evolved in the 17th and 18th centuries and tended to be humorous or bawdy, with a strong non-musical point, either punning, programmatic or otherwise descriptive. The double entendre was the favored device in the catch. The aim was for two or more lines to come together during the course of the song so that, by means of judiciously placed rests in one or other parts, indelicate or lewd phrases otherwise unsuspected would emerge. The round and canon, textually a bit more sober, were usually of musical interest only. Some derived the word, ‘catch’ from the Italian caccia or the French chasse, both meaning ‘hunt’ and implying that the various parts could chase one another through an infinite sequence. Others supposed it to refer to the catch or double meaning in the words themselves. We will give you a few examples from one of the surprising “catch” masters himself – Henry Purcell.

With this very specific background in mind, I have created a program (perhaps a non-specific program?) of tuneful, melodious part songs, catches and glees – some historically in the pocket, if you will, and some sporting a more contemporary outlook.

Our program opens with the beautiful Be Like the Bird – Abbie Betinis’ magical canon, characterized by rich, inviting singing. It captures the fragile determination of Victor Hugo’s famous lines, “Be like the bird that, pausing in her flight awhile on boughs too slight, feels them give way beneath her – and sings – knowing she hath wings.” While the text is a bit sober and the text is not considered a ‘catch,’ this clever composition highlights the bird’s wings which can be heard in the soaring overlap of lines and gestures.

Sing We Merrily, [1740] by composer Maurice Greene (c. 1695-1755), a contemporary of Handel, is a thematic diversion: purely an anthem and not a part song. Greene gives us a rollicking way to begin our program – cheerfully, noisily – as an ode to our title and to the tuneful nature of the overall concert.

The main of the program is inhabited by true part songs, beginning with Gustav Holst (1874-1934) and his Five Partsongs, Op. 12. The set comprises many of Holst’s lesser known choral settings, all in the true style of the English part song, some touching and romantic, others convivial and pastoral. Holst is perhaps best known for his very popular 1919 orchestral suite The Planets. But audiences know that Holst wrote a large body of very effective music for choirs. After becoming infatuated with Hindu literature, philosophy and leaving music behind for the study of Sanskrit, Holst returned to the Royal College, studied trombone, played in wind ensembles, began teaching, and was among the first to revive and be an advocate for the music of Purcell (can you see the distant programming connection?), and began conducting choirs in schools. A series of illnesses was broken by a visit to Harvard as Guest Lecturer in Music in 1932, but he fell ill again that spring and died in London in 1934.

Having both studied with Charles Villiers Stanford at the Royal Conservatory of Music, Holst and Ralph Vaughan Williams (1872-1958) became lifelong friends, even spending days reading through and critiquing each other’s works. They were both strongly influenced by the simplicity of folk songs from all over Britain.

Vaughan Williams was an English composer of symphonies, chamber music, opera, choral music, and film scores. His operas attained some stage performance, but all too often by students or amateurs. His Falstaff opera, Sir John in Love, based on Shakespeare’s Merry Wives of Windsor and composed between 1924 and 1928, had its premiere at the Royal College of Music in 1929 but did not achieve professional performance until 1946. Not surprisingly, he gave some of the music wider circulation by arranging it as a choral cantata. Thus, In Windsor Forest came about in 1931. In the original opera, Vaughan Williams interpolated lyrics from other Elizabethan authors and from other plays by Shakespeare. The Cantata opens with a setting for women’s voices of “Sigh no more, ladies,” from Much Ado About Nothing. The “Wedding Chorus,” or “See the chariot at hand,” is by 17th-century playwright, poet and critic Ben Jonson. Finally comes “Whether men do laugh or weep,” which is attributed to Thomas Campion, but used liberally by Shakespeare himself. The movements are lyrical, rhythmic and tuneful. While accompanied, you will hear the part song tradition coming through these marvelous tunes.

Composer Kenneth Neufeld lyrically and gorgeously sets Three Songs of Innocence – “The Lamb,” “Little Boy Lost – Little Boy Found” and “The Echoing Green,” from William Blake’s Songs of Innocence and Experience (1794). Blake’s original poems juxtapose the innocent, pastoral world of childhood against an adult world of corruption and repression. Echoing Milton’s cerebral treatment of Paradise and the Fall as states of mind, The Songs of Innocence and Experience explores the existential dimensions of childhood naïveté and adult wisdom. The three you will hear are from the “innocence” side – marked by child-like questioning, melancholy, wit and merriment. These settings were composed in 1979 and well represent Ken’s very elegant style – most notably, the Late Romantic to Early 20th-century English part song tradition, coupled with harmonic complexity and distinct jazz flavorings.

To round out the program, I have included part songs of a more contemporary nature: The Beatles and a little Billy Joel for good measure. You will hear a rhythmically and harmonically complex version of Blackbird, a straightforward part song style rendering of I Will and a heartbreaking arrangement of Billy Joel’s honest and poignant And So It Goes.

A conventional concert of part songs, catches and glees? Probably not. But I hope that you enjoy and revel in the melodious nature of our merry little program. As always, I am grateful for your ongoing support of Cantemus and look forward to greeting you at our reception.