At the Turning of the Year 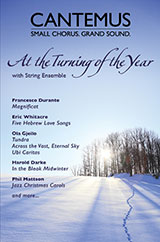 “Mostly,” said the roof to the sky, “the distance between you and I is endlessness;
But a while ago two came up here, and only one centimeter was left between us.”
(Five Hebrew Love Songs, Hila Plitmann)

Sunlight shines on my face;
This is my grace, to be
Restored, born again,
In flame.
(Across the Vast, Eternal Sky, Charles Anthony Silvestri)

There’s a beautiful notion that comes to us from the Celtic tradition: that in the physical landscape and at the turning of the year, there are thin places, where past, present and future intertwine. In a thin place, theologically speaking, the veil between worlds becomes permeable. Heaven and earth meet, and we glimpse what lies at the end of all our waiting. At the turning of the year, we are given the opportunity to “pierce the veil.”

What marks a thin place is not how dramatic it is, but how quiet it makes us and how it invites us to pause and pay attention; how it opens our hearts to the “holy other” who seeks to be born anew within us. Plato once described time as the “moving image of eternity” and surely New Year’s itself points to holiness amid change, to the dynamic and moving nature of reality, in which life, like sacred mercies, is new every morning.

Our winter concert is dedicated to that veil between the worlds, where we are invited to enter into those thin places. At the heart of our concert is Francesco Durante’s Magnificat, depicting the ultimate thin place when Mary and Angel intertwined. It is a familiar story – that of maiden and spirit – based on words attributed to Mary on learning both of her pregnancy and its significance to humanity. Myriads of composers have set this monumental text, with strength, grace and discipline, including Guillaume Dufay, Josquin des Prez, Charpentier, Pachelbel, Vivaldi, J.S. Bach, Schubert, Mendelssohn, Gounod, Bruckner, Vaughan Williams, Rachmaninov, Arvo Pärt – to name only a few superstars.

Francesco Durante (1684-1755) composed two versions of this Magnificat in B Flat – the four-part version that we perform today – and a more elaborate five-part version. The composition date of either version is unknown, but it is thought that both were written in the 1740s. Mystery and controversy have shrouded this Magnificat. Although scholars traditionally agree that Durante composed the work, in 1910 musicologist Giuseppe Radicciolli attributed the work to Giovanni Battista Pergolesi, Durante’s talented pupil. That myth has haunted the work ever since. Today, the piece is firmly attributed to Durante, and his rendering of the Magnificat text is both a hymn of joy and thanksgiving. Durante, unlike his peers, distinguished himself as a composer of liturgical music. He was a Neapolitan, and it was the fashion among composers of the day to grandly produce operatic repertoire. This was not so for Durante, and this Magnificat represents his most significant piece.

The work consists of six movements with counterpoint in the first movement built upon the eighth psalm tone cantus firmus – the original Gregorian chant melody (“Magnificat anima mea Dominum” or “My soul doth magnify the Lord”). In each successive movement, overlapping, imitative melodic lines are carefully woven, using text, tempo and vocal color to lend each movement distinct and particular character. The recapitulation of the opening chorus at the end of a work was a growing practice for Neapolitan composers in the latter half of the eighteenth century. In the sixth movement we see this with an almost literal repetition of the opening material, this time using the “Sicut erat” (part of the Doxology: “As it was in the beginning”) to complete the Magnificat.

The Five Hebrew Love Songs of Eric Whitacre are poignant settings of original poetry by Hila Plitmann, the composer’s wife. The poetry reflects transient and moving images along with deep interpersonal, intertwining connections. Melody and melodic ornaments allude to idioms of Hebrew folk music; the movements are, by turn, lyrical, romantic, sensitive, warm, rhythmic, and dance-like. You will also hear three of Phil Mattson’s best Jazz Carols – tunes that are intimately familiar to us all, but marked by a warm and brilliant shift in harmonic language and color. And we bring you Ola Gjeilo’s Sacred Heart (Ubi Caritas III), Across the Vast Eternal Sky and Tundra – three pieces designed to bring Heaven and Earth together in one vast space. Gjeilo is a young Norwegian composer and perfectly combines a gorgeous and repetitive chordal foundation with sweeping melodies, bringing Plato’s “moving image of eternity” to mind.

We invite you to open the door to these thin places. You will hear music that feels familiar and evocative as well as music that is fresh and new. We are grateful for your willingness to take the journey with us. As always, I look forward to seeing you after the concert and wish you a happy and healthy holiday season.