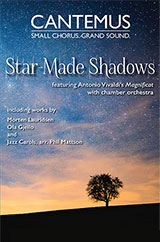 “I have never heard anything so voluptuous and affecting as this music…in these delightful concerts.”
(Jean-Jacques Rousseau, 1712-78, Genevan philosopher, writer, composer and Vivaldi fan.)

As a special highlight of this year’s winter concerts, Cantemus presents Antonio Vivaldi’s lesser- known Magnificat, for chorus, soloists and instrumental chamber ensemble. Vivaldi was a virtuoso violinist and is best known for his 500+ concertos, including the most famous, the Four Seasons. And, of course, Vivaldi’s Gloria is one of the most performed, beloved and superstar choral/orchestral works in the classical canon.

Vivaldi, an ordained priest, was a prolific composer of operas (for which he sometimes even acted as impresario) as well as of sacred music. In Venice, the Ospedale della Pietà was one of four significant charitable institutions, this one for orphaned or abandoned babies. As the babies grew up, the boys (few in number) were trained as craftsmen, the girls in lacemaking and laundering, unless they showed special musical talent. If they were musically gifted, they received the finest instrumental and vocal training imaginable. Vivaldi, known as “Il Prete Rosso” (The Red Priest, so called because of his flaming red hair) was contracted by the Ospedale as a part-time instructor. He was never able to convince the board of the institution to offer him the more prestigious full-time position of Maestro di Coro. Only when the installed Maestro took ill was Vivaldi asked to stand in as substitute for him. It was during these years, from 1713-1719, and again in 1739, that he wrote sacred choral music for the Ospedale. The carefully trained orphans, under his demanding eye, were the musicians who first played and sang several of his best-known compositions, including the Magnificat that you are hearing today.

Vivaldi’s first setting of the Magnificat in G minor was composed sometime beginning in 1715, and over the years (through 1739) he continued to adjust it for different circumstances and different singers: one version calls for double chorus, another adds oboes to the orchestra. The version offered today, RV 610, is the original version for single chorus. The work is divided into nine movements. From sprightly counterpoint to pulsing chromaticism, from daring harmonies to surprising elegance, Vivaldi masterfully crafts bold changes from movement to movement.

The text of the canticle is taken directly from the Gospel of Luke (Luke 1:46-55) where it is spoken by the Virgin Mary upon the occasion of her Visitation to her cousin Elizabeth. In the narrative, after Mary greets Elizabeth, who is pregnant with the future John the Baptist, the child moves within Elizabeth’s womb. When Elizabeth praises Mary for her faith, Mary sings what is now known as the “Magnificat” or the “Canticle of Mary” in response. Vivaldi brings his characteristic energy, rhythmic vitality and stunning harmonies to this stirring Magnificat. With our own Jeffrey Mead at the organ and a first-rate string quartet, Mary’s acceptance of God’s call is at once beautiful and haunting.

The concert also features one of Vivaldi’s smaller works, Laudate Dominum RV 606, a concise but powerful single-movement setting of Psalm 116 (117 in Protestant bibles) for choir and strings, composed in his early period at the Pietà. I have fallen in love with this little but mighty piece of music, marked by Vivaldi’s characteristic energy and charm.

You will also hear three of Phil Mattson’s best Jazz Carols – tunes that are intimately familiar to us all but transformed by a warm and brilliant shift in harmonic language and color. And we bring you Ola Gjeilo’s Tundra and Across the Vast Eternal Sky – two pieces designed to bring Heaven and Earth together in one vast space. Gjeilo is a young Norwegian composer who perfectly combines a gorgeous and repetitive chordal foundation with sweeping and infectious melodies.

And finally, you will probably recognize the title of today’s concert from our traditional closer, Sure on this Shining Night by composer Morten Lauridsen and master poet James Agee. “Sure on this shining night of star-made shadows round…” We are grateful, as always, for your support and wish you the peace and joy of the season.