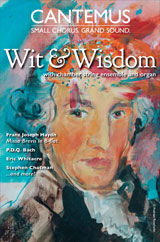 “Look, he’s winding up the watch of his wit. By and by it will strike.”
William Shakespeare, The Tempest

“The fool doth think he is wise, but the wise man knows himself to be a fool.”
William Shakespeare, As You Like It

Today’s program is a joyful happening, filled with music born to please, to charm, and to delight. My natural inclination is to program with a slightly heavy hand (I do love the dark side sometimes) – music that is poetically charged and obscurely ponderous. Truthfully, it is a challenge to bring “funny” to life in music. Our aim today is to bring a smile to your collective faces – either through musical and textual witticisms or through congenial canonical repertoire.

The Oxford English Dictionary defines “wit” as: The capacity for inventive thought and quick understanding; keen intelligence. A natural aptitude for using words and ideas in a quick and inventive way to create humor. In this category, we bring you a mix of composer parodies and hommages. Eric Whitacre gives us undiluted musical fun in Animal Crackers – a set of six pieces that are every bit as witty as Ogden Nash’s poetry. Nash is a comic master of the unexpected rhyme, and Whitacre’s settings are equally surprising and silly. He says, “I’ve always dreamed of writing a substantial collection of choral works that might enter the standard choral repertoire, something with the depth and passion of Monteverdi’s Fourth Book of Madrigals and the charm and timelessness of Brahms’s Liebeslieder Waltzes. I WROTE THIS INSTEAD.” oy.

In 1983, composer, conductor and teacher Carl Zytowski wrote a set of three pieces, based on nursery rhymes, called Ave Mater anser! Each piece is dedicated to the style of a beloved composer – in this case, Handel, Schubert and Carl Orff They are set (mostly) in Latin – a linguistic fusion, if you will, of the original rhymes. “Wine-soaked plagiarist and mis-opportunist” P.D.Q. Bach, alter ego of composer Peter Schickele, is a parodist of the highest order. His Two Madrigals from “The Triumphs of Thusnelda” (“My Bonnie Lass She Smelleth” and “The Queen to Me a Royal Pain Doth Give”) are pure choral fun, requiring a seriousness of purpose and (fingers crossed) a laughable result.

To bridge the territory from wit to wisdom, you will hear a number of quirky yet virtuosic works. Stephen Chatman’s “Clocks” (from Time Pieces) was inspired by the composer’s antique grandfather clock. It is a textual and musical glossary of clock sounds, consisting of repetitive “tick-tock” motives and the occasional “cuckoo” or low, loud Westminster chime sounds. And Paul Ayres’ “arrangement” of the “Hallelujah” chorus is probably the most familiar source material on the program. Ayres begins with a mostly comfortable and fairly predictable setting (although set in 3/4 time, instead of the usual 4/4 meter), but soon the piece runs itself off the proverbial rails. For chorus and audience alike, it is a thrilling, if terrifying, journey away from Handel’s most beloved chestnut.

We continue our journey to wisdom with three of Haydn’s thirteen appealing part songs, completed sometime near 1801 and numbering among his last compositions. Haydn in his later years was a very public figure. As perhaps the most famous living composer of his time, he had all the commissions he could handle, and he complained that “my duties increase as my years increase.” That makes these little songs all the more endearing, for he told his biographer Georg August von Griesinger that they were written “con amore,” strictly for love, with no external motivation. In his final years, after he stopped composing, Haydn signed his letters with a little musical autograph drawn from “Der Greis” (The Old Man): “Hin ist alle meine Kraft/Alt und schwach bin ich” (Gone is all my strength/Old and weak am I). The majority of these songs are comic, and a drinking song like “Die Beredsamkeit” (eloquence, or talkativeness) has characteristic examples of Haydn’s sense of humor as the singers finally mouth the word “stumm” (mute) after Haydn has masterfully drawn the contrast between water, which makes us mute, and good wine, which turns us into arguing orators. “Die Harmonie in der Ehe” (“Harmony in Marriage”) is a traditional battle of the sexes, where the chord placed on the word “harmonie” is ironically discordant. In these songs, Haydn turned his mastery of counterpoint to humorous ends, with utterly delightful results.

Speaking of Haydn, what better representative of wisdom could I find? From humorist to sagacious composer, he was undoubtedly one of the most important figures in the development of the Classical style during the 18th century. The OED defines the word “wisdom” as the capacity of judging rightly in matters relating to life and conduct; soundness of judgement in the choice of means and ends; sometimes, less strictly, sound sense, esp. in practical affairs: opposed to folly. Haydn’s jewel-like Missa Brevis Sancti Joannis de Deo was composed in the mid-1770’s for the chapel of the Order of the Brothers of Mercy at Eisenstadt. Haydn dedicated a number of small sacred pieces to Saint John of God, a 16th- century Portuguese monk and the founder of the order. Haydn uses a “church trio” scoring (violin 1, violin 2, cello), and the Mass is nicknamed “Kleine Orgelmesse” (“Little Organ-Mass”) because there is a lovely organ solo in the Benedictus. The work is a typical missa brevis in that the four voice parts sometimes sing several different sets of words at the same time – the odd practice of reducing the length of long movements of the Mass – typically the Gloria and the Credo. Over centuries, the work was revised and edited, but it retained popularity well into the nineteenth century. Eventually, the work was given a new Benedictus, replacing the old-fashioned organ solo, and the whole piece was newly scored for clarinets, bassoons, horns and trumpets. It has rightly been returned to its original form, for it maintains, in the words of H. C. Robbins Landon, a “quiet spirit of devotion, even of mysticism, that is most appealing.”

I sincerely hope that this little bit of musical wit and wisdom bring you some well-earned delight on a mid-Spring day. We thank our string players, Edward, Katharina and Sandi-Jo, who, along with our beloved Jeffrey, will accompany Haydn’s Missa Brevis. Soloist Adriana Repetto joins us as well, not only for the Benedictus movement, but also to inject a little wit and wisdom of her own. As always, I am grateful for your ongoing support of Cantemus Chamber Chorus and look forward to greeting you at the conclusion of the concert.