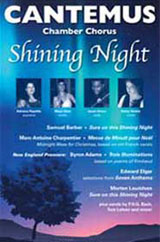 Sure on this shining night
I weep for wonder
wand’ring far alone
Of shadows on the stars.

These beautiful lines from ‘Sure on this shining night,’ by poet James Agee, are one short section of a longer poem entitled “Description of Elysium,” from his book Permit Me Voyage, published in 1934. They serve as inspiration for my inaugural concert with Cantemus, a wonderfully expressive and welcoming group of singers. It is an honor to work with this fine chamber chorus.

Bright snow, star-filled nights, crisp winds…nature reserves some of her most tender and intimate moments for the winter. The season of long nights and blackened skies takes center stage with Shining Night, Cantemus’ December concert, a musical musing on a season that shivers with quiet joy.

Agee’s poetry serves as a frame for the concert, beginning with Samuel Barber’s melodious and haunting setting of the text. A fine baritone himself, Barber’s love of poetry and his intimate knowledge and appreciation of the human voice informed all of his vocal writing. “Sure on this Shining Night” is one of the composer’s finest Romantic settings, a relatively early work [1938] pointing to the compositional mastery that is to come. The perfect marriage of melody and text, the piece presents a depth of hushed acceptance and an appreciation for a life that will not last forever.

Morten Lauridsen’s setting of the same text bookends our concert. Lauridsen’s version is in the warm key of D-flat, exquisitely conveying the sense of fullness and rapture that infuses the text, even in the face of inevitable change and loss. The repetition of lines and phrases builds on the repetition of sounds in the poem – note Agee’s use of “sure,” “shining,” and “shadows” or “weep,” “wonder” and “wand’ring,” an expressive alliteration that calls us into the sheer beauty of the verse.

At the heart of the concert are two larger choral works: Marc-Antoine Charpentier’s Messe de Minuit pour Noël (Midnight Mass for Christmas) and Byron Adams’ Trois Illuminations (Three Illuminations). Charpentier’s output of sacred music was prodigious, with approximately thirty-five oratorios, eleven settings of the Mass, over two hundred motets and the well-known Te Deum. Charpentier was particularly drawn to writing Christmas music, producing instrumental carols, Latin oratorios on Christmas themes, French pastorales and a Christmas mass – the charming Messe de Minuit pour Noël. This piece dates from the early 1690’s (although it was not published until 1962) and was probably composed for the great Jesuit church of St. Louis in Paris, where Charpentier held the high post of “maître de musique.”

The use of popular carols in church music had long been an accepted practice. In England carols were more often sung than played, but in France noëls figured prominently in the substantial French organ repertoire. The liturgy of Midnight Mass permitted the singing and playing of these Christmas folksongs, and Charpentier’s idea of basing a whole mass on these songs was completely original. Altogether there are eleven noëls, most of which are dance-like in character, reflecting the carol’s secular origins. In addition to the carol melodies that he adapted to fit various parts of the mass text, Charpentier also composed new material, seamlessly blending the old and the new into a charming whole.

“Trois Illuminations,” writes Byron Adams, “represents my ongoing fascination with the poetry of Arthur Rimbaud (1854-1891), an intellectually and sexually precocious schoolboy who wrote a dazzling and original body of verse by the age of twenty.” Rimbaud, a volatile boy-poet, wrote the body of his poetry in a space of less than five years. His highly suggestive, subtle work has been identified as an early example of free verse because of the rhythmic experiments in his prose poems, Illuminations (1886). Adams, living, teaching and composing in California, is a marvelous composer, and I have had the great fortune of working with him in the past. In these three verses, Adams gives us an impressionistic musical landscape, marked by lilting rhythms and lush harmonies.

To round out our program, I have added three stirring movements from Sir Edward Elgar’s Light of Life, along with a few surprises from P.D.Q. Bach and Tom Lehrer. What a pleasure it is to bring this repertoire to life with such a warm and dedicated chorus. Shining Night represents a night of firsts for us together. Please stop by and introduce yourself to me at the conclusion of the concert. I look forward to sharing this music with you and meeting you soon.