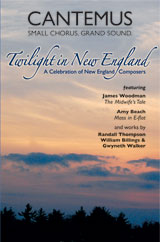 As Cantemus moves into its 30th year, I have an opportunity to look back on my first year with this lovely chorus, to reflect on its rich and varied history and to vision with its members a future filled with possibility and excellence. This past year, we worked hard to tame a steep learning curve and to infuse our work with a renewed energy and discipline.

Twilight in New England celebrates this new energy mixed with a kind of sweet nostalgia by re-visiting some of New England’s most esteemed historical composers and highlighting some contemporary stars: William Billings, Randall Thompson, Amy Beach, James Woodman, Gwyneth Walker. The word twilight is defined as “the light from the sky between sunset and full night produced by diffusion of sunlight through the atmosphere and its dust.” This program is an ode to that magical dusty light that falls over the region’s skies, lakes, forests and ocean.

At the center of this program is James Woodman’s extravagantly beautiful and tuneful cantata The Midwife’s Tale, commissioned and first performed by Boston Cecilia in 1996. Educated at Phillips Exeter Academy, Princeton University, and the New England Conservatory, James Woodman (b. 1957) moved to Harvard Square in 1979 and has remained there ever since. His organ and choral works have received a wide range of performances, including Magdalen College (Oxford), the American Cathedral in Paris, St. Thomas Church (NYC), and Harvard's Memorial Church.

The Arundel manuscript contains non-canonical gospels (unlike our canonical Matthew, Mark, Luke and John) called “Infancy Gospels.” These particular passages are based upon the infancy gospels of Pseudo-Matthew and of James, highlighting details of Jesus’ early childhood:

Zachel, the midwife said to Joseph, “Who is the young woman who will
give birth in this cave?” Joseph replied, “Mary, who was promised to me,
who was raised in the Lord’s Temple…come and see.” When Zachel wished to
enter the interior of the cave, she was afraid, because a great light shone
resplendent in the cave, the light did not wane in the day not through the night
as long as Mary stayed there…”

Where The Midwife’s Tale supplies a more secular and universal view of that famous birth, Randall Thompson’s The Nativity according to Saint Luke is a musical drama in seven scenes with text taken from the first two chapters of St. Luke’s Gospel. Marked by traditional form and cheerful spirit, “And the child grew” gives us the miracle of incarnation sealed and certain; “My Soul Doth Magnify the Lord (Magnificat)” is Mary’s flowing and mysterious response to that which is being asked of her; “Nowel” is a contemplative carol, announcing the joy of the season.

A former faculty member of the Oberlin College Conservatory, Gwyneth Walker resigned from academic employment in 1982 in order to pursue a career as a full-time composer. For nearly 30 years, she lived on a dairy farm in Braintree, Vermont, but has now returned to her childhood hometown of New Canaan, Connecticut. Ring Out, Wild Bells, with words by Alfred, Lord Tennyson, celebrates the image of bells (represented by cascading "ringing" fourths in the piano accompaniment) to herald both the "going out" of the old year and the "coming in" of the new year. In Ms. Walker’s adaptation of the text, the bells herald the ringing out of injustice and the ringing in of fairness for all. I Thank You God is adapted from the E. E. Cummings poem "i thank you God for most this amazing day." A piano introduction, marked "slowly unfolding, with wonderment," spans the broad range of the keyboard, as if expressing the breadth of space and life. The chorus enters, offering thanks for "the leaping, greenly spirit of trees," "a blue true dream of sky" and "everything which is infinite." I particularly love the human aspects of this text: “tasting touching hearing seeing breathing…now the ears of my ears awake and the eyes of my eyes are opened.”

Recognized as America’s first successful woman composer, Amy Beach or Mrs. H.H.A. Beach was born on September 5, 1867 in Henniker, New Hampshire, to Charles Abbott Cheney and Clara Imogene Marcy Cheney, a distinguished New England family. Amy was a child prodigy and began playing the piano at the age of four, memorizing anything she heard correctly. A pioneer on many fronts, she was the first American woman to compose a symphony, the Gaelic Symphony, premiered in 1896 by the Boston Symphony Orchestra. She began work on her Grand Mass in E-Flat in 1886. The Handel and Haydn Society premiered her Mass in Boston in 1892. The Mass was not performed publicly again until the 1980’s. The Grand Mass reflects the late Romantic period in the breadth of its conception, its exploration of unexpected harmonic relationships, chromatic meanderings, long soaring melodies, and dynamic diversity.

William Billings was America’s leading 18th-century composer. A tanner by trade, he was completely self-taught in music. He lived in Boston during the Revolutionary War era and was active in patriot circles that included Samuel Adams and Paul Revere (who engraved some of his music). In his time Billings was acclaimed as a master teacher of choral singing, and he was a leading force in establishing a uniquely American phenomenon: the 18th-century New England singing school. He published several collections of music for use in these singing schools. These volumes were not so much intended to be music collections as they were to be music textbooks with practical examples. “I am the Rose of Sharon” was published in a 1778 collection called The Singing Master’s Assistant. The anthem is a tad racy, based on a text from the Song of Solomon! “While Shepherds Watched Their Flocks by Night” (Bethlehem) was also a part of The Singing Master’s Assistant. This colorful and brief anthem excitedly recounts the story of the shepherds' startled response to seeing the Angel of the Lord in glory, announcing the birth of the Savior. The opening homophonic texture and moderate tempo give the wanted gravity and grandeur to the first statement of the text. In striking contrast is the quick fuguing tune of the second section – an exuberant counterpart to the opening. Shiloh uses a text taken from the Old Testament. This spirited song first appeared in The Suffolk Harmony in 1786 and adopted the singing idioms of the shape-note tradition of North America.

For fun and just because, I have added two pieces that illuminate universal themes of birth, heritage, children and new beginnings. Although not a New Englander (and therefore a thematic outlier), Ysaye M. Barnwell is one of America’s most respected educators, composers, arrangers, and performers. Best known for her 33-year association with the acclaimed group Sweet Honey in the Rock, Dr. Barnwell was originally trained in the fields of speech pathology, public health and technology and the arts. Along with her successful stage career, she has spent the past 30 years off stage working as a master teacher and choral clinician in African-American cultural performance. We Are… and Breaths are two of her best arrangements, calling on our grandmother's prayers, our grandfather's dreamings, and the breath of our ancestors, filling us with imagination and endless possibilities.

As always, I look forward to greeting you after the concerts in December. Here’s to Cantemus’ 30th birthday and a future filled with endless possibilities!