A Season of Gloria! 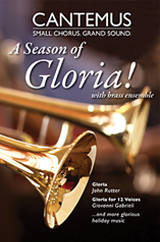 The “Gloria” is an ancient and celebratory hymn of praise that has been used in the Church since the second century. The opening line of the hymn is taken from Scripture (Luke 2:14), where the angels announce the birth of Christ to the shepherds. The hymn was composed in Greek but was introduced to the west by St. Hilary of Poitiers (d. 368), who was the first to introduce hymns into the Western Church.

Welcome to Cantemus’ A Season of Gloria! The “Gloria” text sits at the heart of our concert – a jubilant and joyful declaration: “Glory to God in the highest and peace to God’s people on earth!” For 700 years, composers have been inspired by this upbeat, exultant text. And in a complex, challenging, achingly factious world, the “Gloria” offers an unbridled aesthetic of joy.

From Gabrieli to Rutter, from Bach to Bass, our program offers creative and varied settings of this much beloved text. The core of the program can be found in John Rutter’s rejoicing Gloria, scored for chorus, 8 (count ’em, 8!) brass players, percussion and organ. Choral settings of the “Gloria” appear most frequently in the context of the Mass, but Rutter, like Vivaldi, wrote what has become one of his best-loved compositions as a freestanding concert work. Commissioned by the Voices of Mel Olson, it premiered in May 1974, in Omaha, Nebraska, conducted by the composer – his first professional appearance in the United States. Rutter later wrote of this experience:

“The music was written quickly in the spring of 1974, and in looking back at it now I find a mixture of influences: Walton (who knew a thing or two about brass bands, and festive and ceremonial writing), Stravinsky, Poulenc, and, running like a thread through the whole work, Gregorian chant.”

Rutter divides the Gloria into three movements, as he describes, “exalted, devotional, and jubilant by turns.” Beginning with a rousing instrumental prelude from the brass, stacked-up harmonies and rhythms lay out the material that re-appears as commentary between the chorus’s chant-like lines of praise and “call for peace” on “pax.” The slower middle movement takes an introspective turn, with extended instrumental passages (first organ alone, playing filigreed figures, and later accompanied by a mournful brass choir). Vigorous rhythms re-introduce the brightness of the opening for the final movement, but Rutter enlivens the music further by alternately writing call-and-response and contrapuntal textures for the chorus. The first movement’s chant theme returns for a final triumphant statement, punctuated by pealing fanfares and boundless joy.

The most famous compilation of Giovanni Gabrieli’s (c. 1557-1612) choral and instrumental works is the Sacrae Symphoniae of 1597; it is from this collection that the Gloria was taken. The piece was written for three choirs of four voices each. It is highly antiphonal in nature and was probably meant to be performed in the acoustic space of a large church. Much of his music was written for antiphonal double choir in St Mark’s expansive spaces and included brass instruments. The unique design of St. Mark’s, in Venice, with its two opposing choir lofts, led him to his characteristic antiphonal style. Gabrieli relied less upon imitation than on alternation of voices and instruments.

I have paired the composer’s Gloria with O Magnum Mysterium, which grew out of the Venetian polychoral style. The piece was considered more progressive than the Roman school of Palestrina and Victoria and represented a bridge from Renaissance to Baroque idioms. His version of the work was published in Venice in 1587, in Concerti di Andrea et di Giovanni Gabrieli, which consisted largely of works by his uncle, Andrea Gabrieli, who held the post of organist at St. Mark’s Basilica and was a significant influence on his nephew’s compositional style. After the remarkably regular phrases of the opening section, Gabrieli achieves mystery through the sudden switches from G minor to G major and back by both choirs in turn. The work is a cardinal example of unpredictability, choir interrupting choir, impeding a steady flow, extending an idea in rapturous contemplation.

Randol Alan Bass (b. 1953) is a composer, singer, pianist, arranger, and conductor. His expressive Gloria, set for chorus, brass, organ and percussion, was composed in 1990 especially for the New York Pops Orchestra, conducted by Skitch Henderson, and the Texas Christian University Choirs. Bass sets this same text in varying moods and tempi. The composer notes, “This particular setting of the ‘Gloria’ text makes use of multi-metric rhythmic patterns and is reminiscent of the dance music found in much of Eastern Europe. It contains moments of bittersweet lyricism as well as much fanfare brass writing.”

To open today’s program, you will hear Gwyneth Walker’s triumphant Ring Out, Wild Bells, a Christmas anthem on the poem by Alfred, Lord Tennyson. The text celebrates the image of bells (represented by cascading "ringing" fourths in the accompaniment) to herald both the “going out” of the old year and the “coming in” of the new year. The choral texture, again accompanied by brass and organ, is primarily homophonic with some alternation between upper and lower voices. In Ms. Walker’s adaptation of the text, the bells herald the ringing out of injustice and the ringing in of fairness for all. The piece is at once triumphant and plaintive.

You will hear a few other surprises on the program. Hints of “Gloria” and exultation abound. I thank you, as always, for your continued support of Cantemus Chamber Chorus. May your season be filled with radiance, light and, most of all, joy.