Jeffrey Mead joined Cantemus in January 2012, as keyboardist on piano and organ. 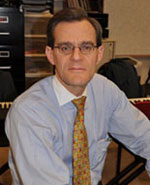 In his life as a musician, Jeffrey Mead has applied his organ, harpsichord and piano skills as church music director and organist, recitalist, chamber musician, and orchestra member. In the latter capacity, he has collaborated with various ensembles in New England and Germany, performing major choral and orchestral works, most notably while serving as accompanist for the acclaimed Boston Cecilia chorus and as keyboardist for the New Hampshire Symphony and the Bad Reichenhall Philharmonic Orchestra (Germany).

Jeffrey has been a church organist for more than 25 years, most recently (since 2005) at First Congregational Church in Winchester, MA. He also serves as Treasurer of the Old West Organ Society, a non-profit organization committed to the preservation and promotion of the remarkable instrument at Boston’s Old West Church. 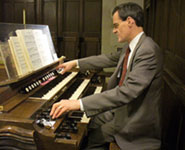 Jeffrey holds degrees from Oberlin College and Conservatory, and a Master’s degree from Westminster Choir College, with post-graduate studies at the New England Conservatory and the North German Organ Academy in Bremen, Germany. Jeffrey also holds the position of Trust Officer with the Investment Management Group of Rockland Trust Company, a community bank based in southeastern Massachusetts.