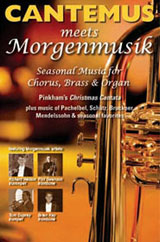 Welcome to our second 25 years! Last year was a wonderful time of music making, and I sincerely hope that you were able to share in our yearlong celebration of Cantemus. Its growth from a small madrigal group to a larger chamber chorus has always been focused on the mission of performing thoughtful, challenging, and artistic choral music concerts for our North Shore audiences. That mission continues.

As we begin this new concert season, I am mindful of the legacy of all the musicians, singers, conductors, accompanists, and guest artists who have had a connection to the Cantemus Chamber Chorus. How do I best continue that legacy, and honor the time and talents of so many people? I think one part of that answer lies in the selection of exciting and beautiful musical repertoire for our concert programs. As the conductor of Cantemus, I am always thinking of different kinds of repertoire to perform for you, our audience. For me, that is the most important way to continue the legacy of joyful artistry and commitment that we, as members of Cantemus, have inherited.

So how about some brass and choral music, along with works by well-known and important composers, and with some great arrangements of classic seasonal texts to top it all off? And when I think of brass, I think of Morgenmusik, a “brass collective founded by Philip Swanson (trombone) and Richard Given (trumpet) to perform and record repertoire for chamber brass ensembles as well as brass in combination with other instruments.”

Our audiences have heard Mr. Given and Mr. Swanson in individual guest artist appearances with Cantemus. Rich Given performed the Halsey Stevens “Magnificat”and some “Messiah” movements on a concert a few years ago, and Phil Swanson was a member of the jazz sextet (playing piano and trombone) that appeared on our March 2008 jazz concert. They will be joined by two other performers from their brass collective, Gabriel Langfur and Bruce Hall. These four gentlemen are truly talented artists, and, in forming Morgenmusik, they have enriched the cultural life of the northeastern United States.

You will hear the brass quartet on three works for chorus, two from the Baroque era and one from the twentieth century. Heinrich Schütz (1585-1672) is an important musician who composed a great deal of music for many genres, and his works for chorus and other instruments are central to the Baroque choral repertoire. According to notes for this performing edition of “Hodie Christus natus est,” Schütz probably composed this work around 1610 in Venice, where he was influenced by Gabrieli. Johann Pachelbel (1653-1706) composed this setting of the text that we recognize as “now thank we all our God,” a text written by Martin Rinkart (1586-1649) as a “hymn of thanks to be sung by his family as a table grace during the Thirty Years’ War” (The New Century Hymnal Companion, The Pilgrim Press).

The Boston composer Daniel Pinkham is well known to everyone in this region and internationally, and his “Christmas Cantata” remains one of the beloved and most performed works in the choral / brass repertoire. It is filled with exhilarating challenges for the chorus in the rhythm, articulation, and dynamic changes that continually occur throughout the three distinct and stylized movements. The first movement begins with a large declamatory outburst and is followed by a section with faster tempo and polyrhythmic activity (consecutive measures of music with different metrical divisions).

The second movement begins with a quiet and evocative setting of “O magnum mysterium” that unfolds into louder and larger climactic moments, the final one of which ends with echoes of the beginning. The third movement is a ritornello form (one section repeats frequently between new sections), as the “Glory to God in the highest…” text returns again and again between three verses. Rhythmic syncopation and metrical variety are achieved within a four-beats-to-the-measure continuum, providing a wonderful closing to this choral gem.

Morgenmusik will also perform with our talented accompanist and organist Frances Burmeister in a performance of “Grand Choeur Dialogué” by Eugène Gigout. This is a very exciting work for organ and brass quartet that you will truly enjoy. And we will be treated to additional works for brass quartet alone, chosen by our outstanding guest artists.

Thus, these five areas of brass / choral music form the skeletal framework of this concert, fleshed out by three settings of “Ave Maria”: one from the Renaissance; one from the Romantic period; and one as a spiritual sung with the English “Hail Mary,” created by the outstanding African-American composer, choir director, and professor William L. Dawson. You will also hear three different settings of the familiar carol “Deck the Hall”: one by the great American composer / conductors Robert Shaw and Alice Parker; another in an unusual metrical setting of 7 / 8 time; and a third which verges on vocal jazz!

There are additional treats during this concert, including Mendelssohn’s well-known “There Shall a Star Come Out of Jacob,” and a motet by the German composer Seth Calvisius with the text that you may know in English as “Joseph, dearest, Joseph, mine.” So you will hear brass, organ, and chorus in music from the Renaissance, Baroque, Romantic, and contemporary eras, with texts sung in Latin, German, and English. So settle in and be ready for another concert of eventful and eclectic programming. We hope you enjoy each and every minute!