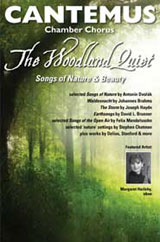 So this one all began with a Brahms song. I remembered some opening lyrics (translated from the original German) as something like “wondrous cool, thou woodland quiet.” It seemed an intriguing statement, filled with lots of programming possibilities. Certainly there were hundreds if not thousands of choices, but through searching, asking, listening, and serendipity it evolved into the works we will sing for you.

The inspiration of Brahms’s “Waldesnacht” (from his Sieben Lieder, op. 62) begins the program. When I think of Brahms, I think – this is real music. His attention to craftsmanship, his beautifully constructed lines, the detail of his phrasing and dynamics; all are apparent in his larger works like A German Requiem, but also here in this part song for unaccompanied chorus. And then for something completely different from the contemporary Canadian composer Stephen Chatman, you will hear the quiet, restless beauty of “Sterling (Woodland) Bells,” composed in 2006. Chatman is an important choral composer, and over the past few years Cantemus has greatly enjoyed performing several of his works.

These two opening works attempt to set the tone for this concert. Music from the 19th century, then from the 21st, German texts and English texts, part song texts and evocative poetry, choral singing a cappella and accompanied, all celebrating Nature. The repertoire also evolved into subsets, specifically birds and water. The Chatman is followed by four evocatively beautiful part songs, two by the British composer C. V. Stanford (from opus 119), and two by Mendelssohn. These are all “for the birds,” that is, “The Bluebird,” “The Swallow,” “The Lark,” and “The Nightingale.” Unaccompanied part song singing is one of the choral singer’s great pleasures, and we hope you enjoy these “standards” of the choral repertoire.

We remain with the German part song, but move to the water, with Mendelssohn’s sprightly “Auf dem See” (On the Lake). Throughout this concert you will hear several Mendelssohn part songs, selected from opus numbers 41, 48, and 59; some of these carry the subtitle “songs of the open air,” to be sung out of doors perhaps, surrounded by Nature. We then continue with Chatman settings of texts by Walt Whitman and Christina Rossetti, two very important 19th-century poets. As always I strongly encourage you to read the poetry before or as we sing; in so doing, I think you will discover the strong and sensitive musicality of Chatman’s works.

We will close the first half with David Brunner’s Earthsongs, works that, says the composer, “speak of the wonders of nature and of the importance of protecting the animals, caring for the plants and nurturing one another.” These pieces use texts from three interesting sources: the 19th-century geologist James Gates Percival; a Buddhist writing from the Sutta Nipata; and a text from the United Nations Environmental Sabbath Program. These are accompanied by piano and oboe, with Margaret Herlehy as our guest artist. You have heard Margaret play the oboe with Cantemus on previous occasions, and she is an accomplished performer and teacher in the region. Margaret will also play an oboe solo during today’s concert, an additional artistic pleasure for us all!

The second half begins with one of my personal favorites, Eric William Barnum’s “Afternoon on a Hill,” on a text by Edna St. Vincent Millay. This work has some subtle choral effects, with sliding voices and “wind bowing down the grass.” Antonin Dvorak composed V prirode (“Songs of Nature”) in 1882. We sing three of these in English translation, and you will hear the sounds of evening in the hushed forest (“Vesper Bells Ring”), the joy of sunshine (“Golden Sunlight”), and the April awakening of nature (“Slender Young Birch”). We follow with a nod to the beautiful extension of the warm weather in Daniel J. Hall’s “Indian Summer” for women’s voices, piano and oboe. This is a meticulously arranged setting of an Emily Dickinson poem, wherein the composer creates flowing lines and dynamic contrasts.

In the spring of 1917, Frederick Delius composed two works To Be Sung of a Summer Night On the Water, and we sing the first one for you this day. The chorus is divided into multiple parts as Delius creates sophisticated harmonies of four, five, and six voices. The placid waters of Delius are followed by Haydn’s “The Storm.” Apparently Mr. Haydn visited London in 1792, and the sea journey was rather treacherous. This is the first time that Haydn wrote music for an English text, and his work captures the calamity and calmness of the sea. It features the capable artistry of our Cantemus accompanist Frances Burmeister.

The program closes with the quiet solitude of more Mendelssohn part songs, translated into English as “In the Forest” and “Peaceful Valley.” Again, these works seem deceptively simple, belying the amount of concentration and energy required from each chorister. We will close the program with Stephen Chatman’s “Thou Whose Harmony is the Music of the Spheres,” which features “ the lyrical obbligato oboe part (that) has an other-world feeling appropriate to the first line of the poem, a theme that is also expressed by the poised and harmonious movement of the vocal parts.”

We seek to lift up the importance, relevance and joy of music making – with you, our audience – as a task worth doing. It is my sincere hope that this program will reach your ears, minds and hearts as a true celebration of choral singing, historical variety, composer craft, great poetry, instrumental artistry, and the human spirit.