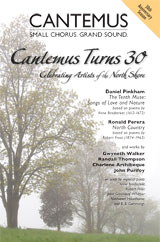 How sweet the silver Moon's pale ray,
Falls trembling on the distant bay,
O'er which the breezes sigh no more,
Nor billows lash the sounding shore.
(Nathaniel Hawthorne, “Address to the Moon”)

Cantemus turns 30. As this much loved chorus celebrates its birthday, I am grateful to share the milestone with a marvelous and committed group of singers, a stable and creative board of directors, and a faithful audience, who has seen Cantemus through a musical journey three decades long.

From its inception, Cantemus has been directed by some of the area’s best conductors. From Founding Conductor Edward Lundergan through Robert Ruplenas, Robert Dean, Robert Littlefield, and Michelle Montgomery Muth, to John Hoffacker and Gary Wood, Cantemus has grown and thrived, struggled and triumphed, and it is my great pleasure to now conduct this resilient, talented and dedicated group.

As I thought about programming for this auspicious year, it seemed natural to gravitate to New England composers and poets. And this I did – Twilight in New England was born and became the thematic juice for our Fall 2012 concert. But this programming challenge thrust me into a deeper research frenzy: could I possibly find material uniquely specific to the North Shore? North Shore composers setting texts by North Shore poets? Well, honestly, my research came up short – very narrow criteria for programming a concert, or at least for programming a textured, varied and satisfying concert. But, with time, I loosened the limitations of my search. The answer was found in programming those masters of wordplay and meaning, poets and writers who have inhabited the North Shore.

So the North Shore is indeed the star of this concert: Cantemus does turn 30, with a musical and poetic celebration of this richly historic area. With scenic harbors, perfect rocky beaches and some of the quaintest towns in America, the North Shore has harbored a number of spectacular writers. “A story in every mile” – isn’t that the saying? The story can be found in the compelling words of Nathaniel Hawthorne (Salem), Robert Frost (Lawrence and Amesbury), Anne Bradstreet (Ipswich and Andover), and John Greenleaf Whittier (Amesbury) and in the melodies and harmonies of New Englanders Randall Thompson, Gwyneth Walker, Ronald Perera and Daniel Pinkham.

Best known as the author of The Scarlet Letter, Nathaniel Hawthorne (1804–64), born in Salem, spent much of his childhood in solitude in the great outdoors and with his books, including works by Shakespeare and The Pilgrim's Progress, and was heavily influenced by them. He was friends with and neighbor to some of New England’s finest writers and intellectuals including Amos Bronson Alcott and his daughter Louisa May Alcott, Henry David Thoreau, and Ralph Waldo Emerson. His lovely Address to the Moon, truly an ode to that orb of night, is set by composer, arranger and producer John Purifoy. You will hear expressive melodic phrases, accompanied by nuanced Chopinesque harmonies.

For his 1958 commission in honor of the 200th anniversary of the incorporation of the town of Amherst, Massachusetts, composer Randall Thompson selected seven poems by one of the North Shore’s favorite sons, Robert Frost. The result? Frostiana, or Seven Country Songs. The pairing of Robert Frost and Randall Thompson works a kind of subtle magic. There is deceptive simplicity in Frost’s poetry, with its straightforward language and rhyming schemes, resulting in an undercurrent of wonder, even in the most mundane of human activities. Thompson responds by providing seven exquisitely crafted movements that perfectly catch the meaning and cadence of the poetry. You will hear two of the most famous movements: the inspiring Choose Something Like a Star and the steadfast The Road Not Taken. New England composer Ronald Perera also captures Frost’s love of the natural world in North Country, a setting of five early Frost poems: To the Thawing Wind, Stars, Revelation, Fire and Ice, and Going for Water.

Anne Bradstreet was born in 1612 in England into an educated and well-connected family. In 1628, at sixteen, she married her childhood friend Simon Bradstreet. Two years later she and Simon and her parents sailed to Massachusetts and lived in Cambridge until 1638 when they moved to Newtowne and then to Ipswich. Sometime before 1644 they moved to Andover, where she lived until her death in 1672. In 1650, without her knowledge, Anne’s brother-in-law John Woodbridge took her manuscript poems to England to be published under the title The Tenth Muse, Lately Sprung Up in America, by a "gentlewoman in those parts." Boston composer Daniel Pinkham’s 1995 The Tenth Muse is a richly textured setting of five of Bradstreet’s lyrical nature and love poems. The movements are rhythmically straightforward, yet marked by a fairly complex and dissonant chordal structure, resulting in flowing jazz harmonies. You will hear a second version of two of Bradstreet’s poems: “If ever two were one” in the a cappella and richly emotional setting by Vermont composer Gwyneth Walker and “The Cooling Shadow,” in Charlene Archibeque’s intimate and nuanced contemplation of nature.

An American poet and editor, John Greenleaf Whittier was born December 17, 1807, in Haverhill, Massachusetts. A Quaker devoted to social causes and reform, Whittier worked passionately for a series of abolitionist newspapers and magazines. The text for Gwyneth Walker’s The Tree of Peace has been adapted from Whittier’s poem "O Brother Man.” This contemporary adaptation of the poem broadens the scope of the original with more inclusive language: "O, my brother and my sister, all who walk upon this earth, fold to your hearts each other." A new text fragment, "Listen, listen to one another," is introduced into the poem, and serves as an interlude between stanzas. The final sentence of the original poem becomes the focal point of this work, returning many times: "Love shall tread out the fire of anger, and in its ashes plant a tree of peace." As a side note, Nathaniel Hawthorne was anything but a fan of Whittier’s writing, saying, “I like the man, but have no high opinion either of his poetry or his prose."

Music, when paired with inspired poetry, is really that perfect “story in every mile.” Thank you for joining us in this anniversary year. Thirty years of faithful encouragement, attendance, enthusiasm and excitement! We are grateful indeed.