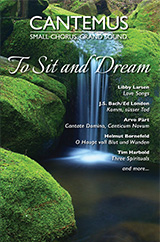 To dream of vast horizons of the soul
Through dreams made whole,
Unfettered, free — help me!
All you who are dreamers too,
Help me to make our world anew.
I reach out my dreams to you.
(from “To You,” by Langston Hughes)

What I do
And what I dream include thee, as the wine
Must taste of its own grapes.
(from Sonnets from the Portuguese,
Elizabeth Barrett Browning, VI)

To Sit and Dream. Musings, reveries, daydreams, imaginings. Our spring concert offers a diverse collection of music and texts that slyly look to the past for inspiration, while boldly moving into the future – a series of musings and re-imaginings, if you will. New Bodies. Old Souls. From Helmut Bornefeld’s and Ed London’s re-conceptions of the music of J.S. Bach to Libby Larsen’s witty re-invention of the Sonnets from the Portuguese, this program is contemporary in feel, but firmly rooted in the traditions of the past.

The title of the concert is taken from a poem, “To You,” by the great Harlem Renaissance poet Langston Hughes. Composer, singer and teacher Rosephanye Powell relies on jazz harmonies and blues influences to relay Hughes’ re-imagining of a “problem world” made new. The text feels current and melancholic, especially in this election year, but in Powell’s adept hands, she creates a suspended dream, a realm of possibility. This expressive piece is the perfect bridge to arranger and pianist Tim Harbold’s “Marchin’ to Zion,” an old-fashioned gospel hymn, with words by Isaac Watts. Harbold gives the piece energy, drive and an unmistakable train engine on the road to “fairer worlds on high.” “Marchin’ to Zion” is part of a larger set of spirituals, including “Somebody’s Knockin’ at Your Door,” “I Want Jesus to Walk with Me,” and “I’ Been in the Storm.”

Libby Larsen’s Love Songs [1997] are a choral cycle, composed on texts by 20th-century American women poets – contemporary poets who have lived rich lives. These Love Songs are Ms. Larsen’s response to Elizabeth Barrett Browning’s Sonnets from the Portuguese, texts she enthusiastically set earlier in her career. Larsen was drawn to Browning’s authentic first person voice, and the poems of Love Songs offer that same first person, but in a new way: this love is gritty and real, approached from complex and mature perspectives. In “At April,” (Angelina Weld Grimké) a wild, driving dance of spring, youth and freedom, the young girls in the poem represent trees growing and stretching their limbs in the spring. “Clinging” (Jeanne Shepard) is a beautiful but mournful rendering of love lost but never forgotten. “Dear Love,” is a deeply moving setting of a love poem by Willa Cather – rich and sustained, with warm and sonorous chords.

Perhaps the most dramatic re-imaginings on the program are found in the works of J.S. Bach. You will hear two of Bach’s most famous chorales re-set in unique and opposing ways. You will recognize “O Haupt voll Blut und Wunden” (“O Sacred Head, Now Wounded”), from the St. Matthew Passion. What is hard to believe is that the tune was originally written by Hans Leo Hassler in 1601. It was a spritely secular song, and in fact a very sexy secular song, from a collection of works, The Pleasure Garden of New German Songs. The journey from lusty little song to the St. Matthew Passion was a long one, but before Bach ever put his stamp on it [1727], it was transformed into a sacred song, with words by Paul Gerhardt [1646]. Helmut Bornefeld (1906-90) was influenced by his contemporaries Hugo Distler and Carl Orff. He made a study of 16th- and 17th-century music, and, in this a cappella setting, he reinstates Hassler’s dynamic, rhythmic treatment of the tune, but retains the sadness of Gerhardt’s text. The result is a more detached and meditative view of the chorale. As a side note, Paul Simon’s stirring anthem “American Tune” is a popular re-interpretation of this iconic German tune. You will also hear a re-casting of Bach’s chorale “Komm, süsser Tod,” a simple and straightforward melody. It is not part of a cantata or a larger oratorio and is one of the few melodies composed by Bach organically as an expression of the text, cited as anonymous [1724]. Ed London’s de-composition, “Bach Again,” is a complex improvisation, abundantly luxurious yet haunting. The dissonance feels dominant and other worldly, suspending known time and space, but each half phrase ends in complete resolution. “Bach Again” offers us a penetrating look inside the strong Lutheran philosophy that life is indeed suffering marked by discordance and longing but that, in death, we find release and, ultimately, redemption.

Einstein said: “I often think in music. I live my daydreams in music.” As always, we are grateful that you choose to spend your time with us… we value your willingness to sit and dream with us. The membership and I look forward to greeting you after the concert and wish you a happy and imaginative Spring!