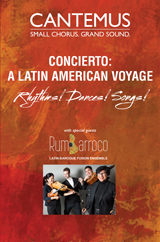 Today’s program is born of a long-standing respect for Laury Gutiérrez and her creative energy. She is a fiercely talented musician from Venezuela, viola da gambist, conductor, and arranger, and I have worked with her for a number of years at the Brandeis University Women’s Studies Research Center. Our stage is graced by Laury and her marvelous group, Rumbarroco.

In the past few years, I have had the opportunity to co-produce Rumbarroco’s CDs, Rumbarroco: Latin-Baroque Fusion and I Found a New Baby: Baroque Meets Afro-Latin Jazz. These are beautiful and electrifying recordings, demonstrating European influence on Afro-American and indigenous music in Latin America – fusing styles with traditional classical music and jazz – and creating new musical genres! Today, you will hear the use of modern and early instruments to create music that is both lovely and exhilarating – in essence, pure fun.

The program is shaped by both the familiar and the obscure. Laury introduced me to the music of Modesta Bor (1926-98), an award-winning, prolific Venezuelan composer, teacher, musicologist and conductor. Her output was enormous; with numerous orchestral, chamber and choral works, she composed 130 small choral pieces. You will hear four of these jewels today, with imaginative and surreal texts (Lorca, Rodriguez and Pérez). Another newcomer to my experience is the clever and talented composer/arranger Diana Sáez, a native of Puerto Rico. Considered a leading specialist in the field of Latin American music, she brings dances to life, and we hope that you will enjoy their infectious melodies and rhythms. El Monigote (The Ragdoll) is a traditional Venezuelan children’s song, arranged in the joropo style – a Venezuelan rhythm from the plains. The singers imitate the sounds of the Venezuelan harp and the cuatro (a four-stringed guitar). Plena represents an early twentieth-century Afro-Puerto Rican rhythm that was also a popular musical form among sugar-cane workers. The rhythm has its roots in West Africa, and in Saez’s engaging original work, the singers establish the rhythm in a clever introduction. The band employs salsa rhythms, hand percussion adds to the textures, and the singers alternate between dance-like melodies and rhythmic improvisations.

Written in 1980, Venezuela is a popular and heartfelt song, with lyrics and music by Spaniards Pablo Herrero Ibarz and José Luis Armenteros Sánchez, collaborators on many renowned Hispanic songs. The lyrics are rich and evocative and speak to the authors’ deep love and respect for the country. It has become Venezuela’s unofficial “national anthem.”

Argentinian composer Astor Piazzolla, born in 1921, is perhaps the most widely performed Latin American composer today. He was the foremost composer and ambassador of tango music, carrying the signature sound of Argentina to clubs and concert halls around the world. As a young man, Piazzolla joined a popular tango orchestra, and, while still a teenager, established himself as a fine bandoneón player and arranger. He studied with composer Alberto Ginastera, and in 1954, his composition “Buenos Aires” won him a scholarship to study in Paris with Nadia Boulanger, who encouraged him to find his own voice by tapping into his passion for tango. Back in Argentina in the late 1950s, Piazzolla did just that, laying the groundwork for what became known as tango nuevo – new tango. In 1960 he formed his seminal group Quinteto Tango Nuevo, featuring bandoneón alongside violin, electric guitar, piano, and double bass. In the ensuing years Piazzolla’s music increasingly used dissonance, metrical shifts, counterpoint, and other techniques inspired by modern classical composition and jazz. In Argentina, where tango is a source of national pride and identity, some tango purists were incensed by these radical departures from tradition, and in the late 1960’s, even Argentina’s military government criticized Piazzolla for being too avant garde. Piazzolla left behind an enormous body of music – more than 3000 works. Today, you will hear three of his most enduring and beloved tangos, arranged for voices. Adios Nonino was written in 1959 three days after the death of his father, as a tribute. Verano Porteño is from what might be called the “Four Seasons” (1967-71) of tango, each one evoking a time of year. The adjective “porteño” refers to Buenos Aires, so that Verano Porteño means “summer of Buenos Aires.” Libertango was written later in Milan, in 1973, and the title represents a fusion, merging “Libertad” (Spanish for liberty) and “Tango,” symbolizing Piazzolla’s break from classical tango.

We are thrilled to add Salem to our roster of concert locations, and especially The Bridge at 211 – Murray Hall, along with Newburyport and Hamilton. We hope that you enjoy the fiery rhythms, songs and dances of Central and Latin America. As always, we look forward to greeting you after the concert and thank you for your continued support of Cantemus.