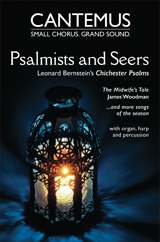 Behold how good and how pleasant it is
for all people to dwell together in unity.
(Psalm 133)

In a world that sometimes feels a bit upside down, where the daily news cycle serves up the unpredictable as “normal,” Cantemus offers a program of old and new, the unforeseen and the foretold, the psalmists and the seers. We look back to the Old Testament for grounding wisdom; we look forward to the gospels for exquisite light. Earlier this year, as I was thinking about a holiday program, my heart went on a search for something a little different than the usual holiday fare – a program born of nostalgia, memories, and good will. I found just what I was looking for, warmly and comfortingly rooted in Leonard Bernstein’s mini-masterpiece, Chichester Psalms, an exuberant and moving work scored for organ, harp and percussion. I unabashedly love everything about this piece: its jagged rhythms; its gorgeous melodies; its dances; its joy; its passionate call for peace. It has been a friend to me at liminal moments in my life, and I welcome it back into my heart with pure delight.

Bernstein specifically called for the text to be sung in Hebrew (there is not even an English translation in the score), using the melodic and rhythmic contours of the Hebrew language to dictate mood and melodic character. Musically, the piece is jazzy and contemporary, yet accessible. Bernstein characterized it as “popular in feeling,” with “an old-fashioned sweetness along with its more violent moments.”

On completing this work, Bernstein humorously penned this little poem:

“These Psalms are a simple and modest affair.
Tonal and tuneful and somewhat square,
Certain to sicken a stout John Cager,
With its tonics and triads in B-flat Major.”

As he did for Bernstein’s Kaddish Symphony, music critic Calum MacDonald furnished program notes for the Royal Liverpool Philharmonic performance of Chichester Psalms in 2004. His apt comments are enlightening and extracted here:

“Each of the three movements contains the full text of one Psalm and an extract from another, but the relationship between the two texts, both in their meaning and in their musical treatment, is different each time. The work opens with an exhortation to praise the Lord: the mood is triumphal and authoritative, like a proclamation. This is the trigger for the main part of the movement, an ebulliently dancing (and in places jazzy) scherzo-like setting of Psalm 100, where the array of percussion is much to the fore in ‘making a joyful noise.’

The second movement begins with the soloist, accompanied by harp, serenely setting forth the opening lines of Psalm 23. As the Psalm is taken up by female voices, however, Bernstein has the male section of the chorus sing verses from Psalm 2 (‘Why do nations assemble, and peoples plot ...’) to much more angular and agitated music, in which the noise of the percussion takes on a sinister meaning. This contrasted music of peace and war proceeds in uneasy counterpoint throughout the rest of the second movement.

The final movement—which is also the longest—begins with a passionate and elegiac introduction. This leads into a warm, assuaging setting of Psalm 131, to a long and intensely memorable melody in 10/4 time, which is first cousin to the love-songs of Bernstein’s stage shows. Finally, the chorus, unaccompanied, intones a verse from Psalm 133 as a vision of peace before the closing Amen.”

As a balance to Bernstein’s Old Testament plea, we offer James Woodman’s extravagantly beautiful, prophetic and luminous cantata The Midwife’s Tale, commissioned and first performed by Boston Cecilia in 1996. Educated at Phillips Exeter Academy, Princeton University, and the New England Conservatory, James Woodman (b. 1957) moved to Harvard Square in 1979 and has remained there ever since. His organ and choral works have received a wide range of performances, including Magdalen College (Oxford), the American Cathedral in Paris, St. Thomas Church (NYC), and Harvard's Memorial Church.

The Arundel manuscript contains non-canonical gospels (unlike our canonical Matthew, Mark, Luke and John) called “Infancy Gospels,” that seek to fill out the details of the life of Jesus up to the age of 12. These particular passages are based upon the infancy gospels of Pseudo-Matthew and of James, highlighting details of Jesus’ early childhood:

Zachel, the midwife said to Joseph, “Who is the young woman who will give birth in this cave?” Joseph replied, “Mary, who was promised to me, who was raised in the Lord’s Temple…come and see.” When Zachel wished to enter the interior of the cave, she was afraid, because a great light shone resplendent in the cave, the light did not wane in the day nor through the night as long as Mary stayed there…”

You will also hear some comfortingly predictable melodies: a festive and celebratory Ding, Dong, Merrily on High (in 7/8 time, not unlike the first movement of the Chichester Psalms) and a hauntingly familiar Gabriel’s Message, a gorgeous arrangement of the extraordinary Basque Carol, set by Grammy award-winning composer and arranger Stephen Paulus. And a Cantemus winter program would not be complete without one of our favorite pieces, Morten Lauridsen’s setting of Sure on this Shining Night, exquisitely conveying the sense of fullness and rapture that infuses the text, even in the face of inevitable change and loss. James Agee’s text is rich with big ideas: Stars; Shadows; Kindness; Hearts; Health, Wonder. The repetition of lines and phrases builds on the repetition of sounds in the poem – note Agee’s use of “sure,” “shining,” and “shadows” or “weep,” “wonder” and “wand’ring,” an expressive alliteration that calls us into the sheer beauty of the verse.

We wish you warm and happy holidays. We are ever grateful for your financial and spiritual support, and, as always, I look forward to greeting you after the concert. Bernstein said, “Music can name the unnameable and communicate the unknowable.” It is my belief that music steadies us in unpredictable times. Thank you for partnering with us on this journey.